Celebrate Christmas in the Holy Land

It may be the ultimate holiday trip: a visit to the land of the original Christmas story, especially during the holiday season. For many, it’s a once-in-a-lifetime pilgrimage to sites referenced in the Bible that still exist today, like Bethlehem, Jerusalem, and Nazareth.
According to the Israel Ministry of Tourism, about half of visitors to the country are Christian, and about 20% identify themselves as pilgrims, with 150,000 pilgrims visiting Israel during the Christmas period.
Christmas festivities in the Holy Land are concentrated in Nazareth, Haifa and Jerusalem, with many making the trip to nearby Bethlehem. Many streets are filled with Christmas decorations, trees and illuminations, with many cultural and family activities available for tourists and locals alike.

The Israel Ministry of Tourism offers free roundtrip shuttle transportation for pilgrims traveling between Jerusalem and Bethlehem, six miles to the south. Visitors are dropped off near the Church of the Nativity in Bethlehem (pictured, top), built by the Romans about 500 years later over the place where it’s believed Jesus was born. The Grotto of the Nativity, under the main altar, has a silver star marking the traditional location of the holy birth.
The timing of the shuttle, during the afternoon of Christmas Eve through to 2 am on Christmas Day, coincides with the ceremonies surrounding the famous Christmas Eve Mass of the Nativity from afternoon through midnight.
Christmas Eve also includes a parade through town, and Christmas carol singing in Manger Square, the courtyard in front of the church.
Jerusalem
In the Christian Quarter of the Old City of Jerusalem, in the area of the New Gate, a festive Christmas Market is held in the two weeks leading up to Christmas. The area is illuminated and decorated for the season, with food and gift stalls, concerts, tours, live performances and more. Concerts are held in the Christian Quarter at the Latin Patriarchate Church, the Church of San Salvador at the New Gate, and the concert hall of the Custodia Terra Santa. 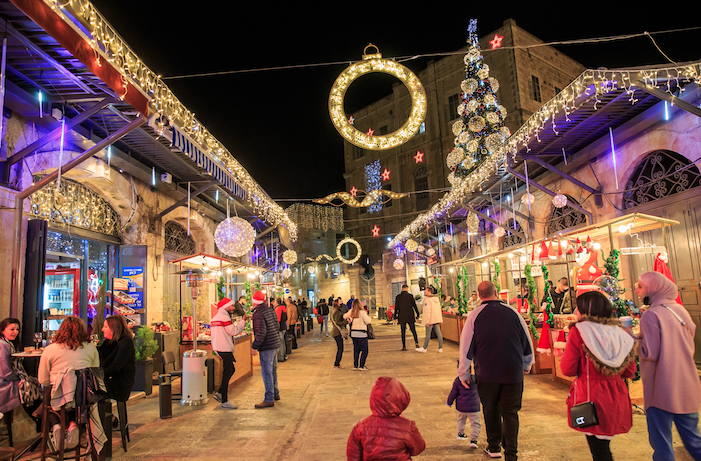 Credit: Kapaim Productions
Visitors may be surprised to see an exhibition of large ‘snowballs’ the alleyways of the Christian Quarter. They lead to a unique Jerusalem institution called Santa’s House, visited by thousands of tourists and locals. Santa’s house is the 700-year-old home of the only official, accredited ‘Santa’ of the Holy Land, Issa Kassissieh. Known affectionately as the Jerusalem Santa, Kassissieh (a professional basketball player) opens his home, free of charge, every early evening except Sunday. The festively decorated house includes a Christmas bazaar, with drinks and toys.
The Christmas schedule in the churches can be found on the Christian Information Center website.

The Festival of Festivals in Haifa celebrates the three monotheistic (single god) religions of Judaism, Christianity and Islam, and their three holidays of Hanuka, Christmas, and Ramadan often coincide during December. The festivities take place in the Arab Wadi Nisnas neighborhood and extend to the German Colony at the foot of the Baha'i Gardens.
Activities during this festival include an Antique Fair, special authentic food prepared by residents of Wadi Nisnas, music by artists of all ethnicities and performances, arts and crafts fair, tours, dances and more. 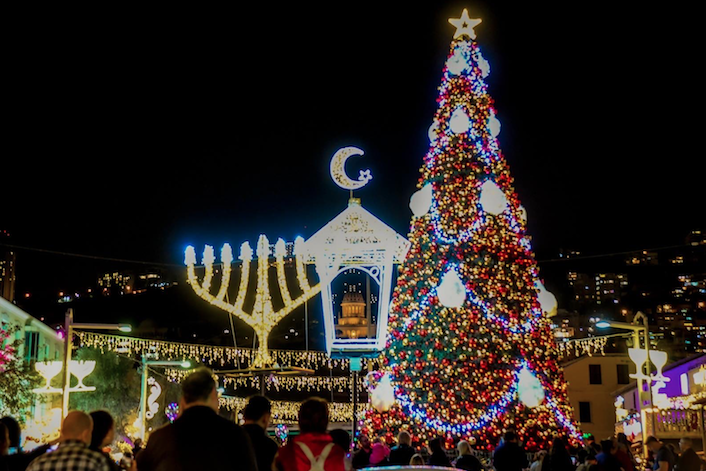 Nazareth, the biblical childhood home of Jesus, is these days decked in Christmas cheer, festivities, and lights. The annual Christmas market lasts from November until January, with stalls, food and drink and illuminations alongside a huge, illuminated Christmas tree near Mary’s Well.
Credit: Doron Yosha
The city also hosts a colorful Christmas parade on Christmas Eve, complete with fireworks and the participation of local youth groups. A second Christmas parade, also with fireworks, takes place on January 6 for the Orthodox community in the city. The many churches and halls host many concerts, and the annual liturgical festival features concerts in three churches with international musicians.

All rights reserved. You are welcome to share this material from this page, but it may not be copied, re-published, broadcast, rewritten or redistributed.

Save up to 50% on a Festive, 5-Star Family Holiday at Nickelodeon Hotels & Resorts

'Fungi Fest' in the British Virgin Islands: It's Not About Mushrooms!

If you've never been to the British Virgin Islands, you might think their 'Fungi Fest' is a culinary event featuring mushrooms. Fungi (foon-gee) is actually the traditional folk music of...

Dare You! Where to Eat the World's Most Dangerous Fish

Prepared incorrectly, it’s 1200 times more toxic than cyanide! Yet this fish has been a treasured delicacy for nearly three thousand years - and foodies with a daredevil streak make sure to...